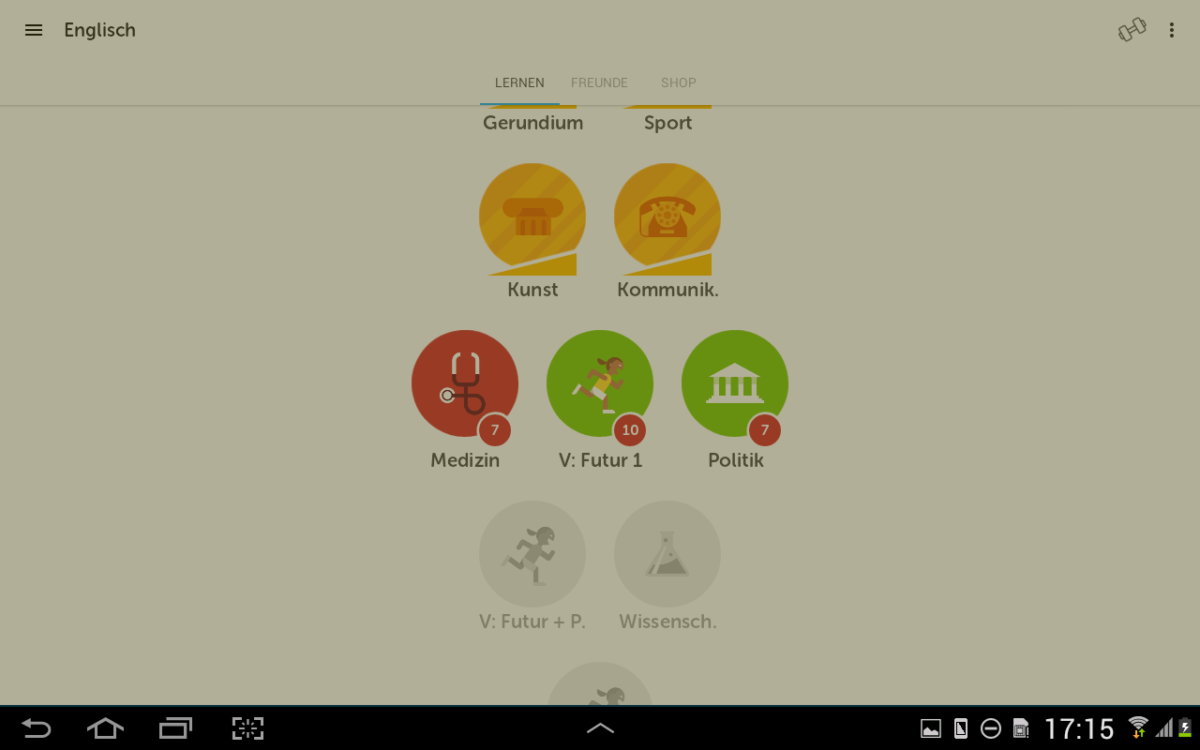 I’ve always had a love-hate relationship with learning languages. From the time I walked out of French class in primary school, to frustrating years of learning French and German in High School, all the way to trying to learn Sanskrit. I loved it, and it frustrated me. In fact, for the first years of high school, I regularly cried in class.

Why? I love language, but the classic teaching methods just don’t work for me very well. So I kept trying, and I never lived up to my own hopes.

There are a few language geniuses out there who can learn languages out of books, my father and eldest brother for instance. For most of us however, that just doesn’t work very well.

For two months now I’ve been improving my French and German on Duolingo. It’s an app as well as a website. It’s based on immersion learning: starting with simple words and phrases, going through topics like travel and past tense, and ultimately including more complicated sentences.

Immersion learning means that each phrase in the language you’re learning is also spoken aloud through your app or pc. So you’re hearing the words and sentences. And because sentences and phrases are at the center of the system, there is always a bit of context.

One of the things I hated about traditional language learning was vocabulary. Sure, I wanted to learn the words and their meanings. However, long lists of words or flash cards don’t give context.  And it turns out that it’s context that makes me remember them.

Learning a language is always frustrating to an extent. Even on Duolingo most people quit within a few weeks. However, I find it is actually a relaxing exercise for me. I guess it’s partly because I’ve struggled with this for so long, I did not expect miracles. I’m happy with any progress I do make. And I am doing quite well.

In general: Duolingo has been tested against taking a university class on the language and it outperforms it by about 20%. That is: on average people learn the about same, in 20% less time.

What makes it work:

Unlike traditional language learning, feedback is instant. That’s huge. It’s also the way I finally got a basic level of spelling in Dutch: learning on a pc. I was in teacher’s college and had (predictably) failed the standard spelling test all teachers have to pass. What saved me was that even then (15 years ago or so) they had a computer program that helped us practice. The feedback was instant, which is a lot better than writing something and getting the marked version back a week later.

Well, Duolingo includes spelling, listening, grammar, vocabulary and even (a bit of) speaking.

Unlike traditional language learning, there is a LOT of audio. This is the way natural language learning works, so it’s a good way into the brain. It’s also the only way to prepare for hearing, and ultimately speaking, the language in the wild.

Still, even for me, a bit of thinking about the grammar helps in getting new forms into my brain.

The system is set up to automatically repeat anything you learned. That’s the way language learning works: your brain needs to see and hear those words again and again. Duolingo has that automatically built in. And to an extent it responds to how well you’re doing.

For instance: I had to do the whole French ‘tree’, because although I had a few years of high school French under my belt, I was really not very good. Now that I’ve finished that tree, I still get to redo topics, when Duolingo thinks it’s time.

My German is better. I did a two more years of German in high school and have actually read books in that language. Duolingo picked up on that and let me test out of most topics. However, it still makes me repeat those topics. And that’s good, because although I have a decent basis in them, I certainly don’t have all the vocabulary and tenses in my system.

Duolingo is ‘gamified‘. That means, it uses the interface of a game to keep you motivated. As I mentioned: this doesn’t work for everybody, but for Duolingo fans it definitely does. I’m so motivated I’m already starting to think which next language I will expand to. And that will be a language I have no (or next to no) background in.

If you check my Duolingo profile or forum posts, the language levels are in reverse order. Currently I am ranked at level 16 for French, 13 for German and 10 for English. There is a listing for English because I am doing the reverse-German tree: learning English for German speakers. In that tree I’m only at level 10, so Duolingo gives me a level 10 for English there.

As anyone can testify, my English is my best second language. I would describe it as academic level near-native. German is next: I am reading Harry Potter in German and don’t need to use the dictionary to understand what’s happening. I can’t talk very well in German, but my comprehension is not bad. In French I’ll be happy to be able to ask for directions and understanding the answer, yet Duolingo lists it as my best language. That’s because I have worked on it more, within the app, than I have on German and English.

So if you all were wondering what Katinka has been up to… among other things, she’s been improving her German and French.

5 thoughts on “Learning a language with Duolingo”