One of the finest series a lover of fantasy will ever find. Best Magic Fantasy by the popular Terry Pratchett. Over the top? Well, that fits. Pratchett IS over the top.

All right.. This time I am not reviewing a book but instead an entire series. Terry Pratchett is the fantasy lovers god. The die hard vampire with crazy powers lover may not find him up to snuff but if you like comedy, mystery, wizards, witches, and trolls (and a few vampires) then you will love this series.

Many of the books follow a plot line with Granny Weatherwax and a unlucky wizard but all of them have the Disk in common.

As a first start for this series I would suggest the “The Color of Magic”. This will make you fall in love. If you have kids, a sub-series that you may find enjoy able to read yourself or to the family may be “Winter Smith”.

I wish I had the opportunity to read them for the first time but I suppose I will have to leave that to you. ENJOY!

Terry Pratchett is one of my favorite fantasy authors of all time. I had vowed not to write about this though, as I have too much else to do. My favorite one, Wyrd Sisters – had me laughing in my seat. Literally.

I don’t know how he does it, but has fun writing about three witches watching a play. They didn’t get the concept at all, and were commenting on the dead guy not being dead and that sort of thing. You really had to be there.

So here’s to the funniest fantasy books ever. 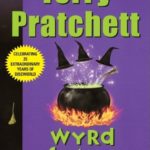 I can’t read a page in this novel without laughing. It’s the book that inspired me to write this page. And yes, of course there are witches in it.

The storm was really giving it everything it had. This was its big chance. It had spent years hanging around the provinces, putting in some useful work as a squall, building up experience, making contacts, occasionally leaping out on unsuspecting shepherds or blasting quite small oak trees. Now an opening in the weather had given it an opportunity to strut its hour, and it was building up its role in the hope of being spotted by one of the big climates.

It was a good storm. There was quite effective projection and passion there, and critics agreed that if it would only learn to control its thunder it would be, in years to come, a storm to watch.

The woods roared their applause and were full of mists and flying leaves.

On nights such as these the gods, as has already been pointed out, play games other than chess with the fates of mortals and the thrones of kings. It is important to remember that they always cheat, right up to the end …
Wyrd Sisters, Terry Pratchett, pp.6,7

It’s hard to improve on the fabulous backcover text of the Discworld books, but I’ll give it a try…

In the Disc World Death is a being. When he goes on holiday things go totally wrong, of course.

The Hogfather is Pratchett’s version of Santa – and when he goes missing Death (see previous) takes over… because the sun won’t come up in the morning if he doesn’t. Did I mention Death’s granddaughter comes into it… possibly one of my favorite Pratchett characters.

Since thoughts are things: the most powerful gods are the ones many people believe in. This is the story of a God who has one true believer left – and it’s time for a new prophet.

Hollywood meets Discworld – do I really need to say more?

It’s the end of the Discworld! The world is going to collide with a red star, and a few misfits, including the failed wizard Rincewood, are trying to prevent it. Or hoping to. Or something. The ending is, as usual, surprising…

Possibly my favorite of the series so far. Pyramids, gods, time travel (of a most unusual and unattractive kind)… and a hero one can relate to somehow.

Fantasy for kids (though suitable for adults)

Lovely story of teen witch Tiffany Aching who has the god of winter fall in love with her. Will she be able to make sure spring can return?

This is what you get when you let Terry Pratchett in on fulfilling three wishes: immortality, having the most beautiful woman fall in love with you and to rule the world… Did I mention the guy wishing for all this is a 13 year old demonologist – and they get to travel through pandemonium (otherwise known as hell).

One thought on “Terry Pratchett’s Discworld: The Funniest Fantasy Novels Ever”