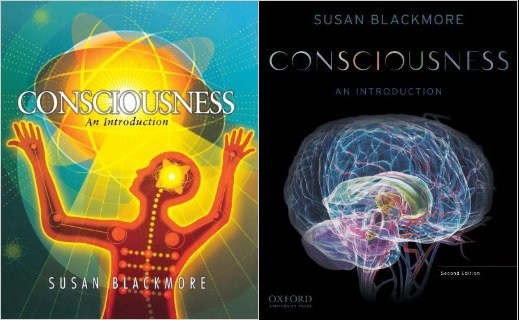 Fascinating. I bought Consciousness, an Introduction, because I first heard of Susan Blackmore as a former parapsychologist. It’s always good to read books by those whom you disagree with – but know what they are talking about. Reading it, I find she really does know what she’s talking about.

The strength of this book is perhaps not so much in her own opinion on things, but in the questions she puts center stage. She does not claim to know the answers. Instead she puts the questions to us, the reader, challenging us to fully understand the evidence and the (often conflicting) interpretations.

And she has practical tests for the reader that are plain fun (and great for helping you learn about your own consciousness).

Warning: studying consciousness will change your life.  (quote from the book)

Why read a book about consciousness?

There are some topics everybody thinks they know about. Education is one: everybody has been to school. Consciousness is another: I’m conscious, what else is there to know?

A whole lot, let me tell you. I’ve been reading up on neurology and psychology for years – but even for me this book has eye opening information and exercises.

Some quotes on the question of consciousness

(on p. 9)
“Even with all my understanding of brain function, I cannot understand how subjective, private, ineffable suchness of experiences, arises from an objective world of actual pencils and living brain cells. These subjective and objective worlds seem to be too different from each other to be related at all. This is my own version of the problem of consciousness – my own sticking point.”

(on p. 242)
“When we look at the brain side … we see nothing but complexity and diversity. At any given time countless different processes are all going on at once, and in different areas…
However, when we look at the mind side … things seems to be unified. It seems as though, right now, there is only one ‘me’ and one more or less continuous stream of experiences happening to me now.”

Have you ever done something and at the end hardly realized how you did it? In chapter 3 Blackmore explores the question what the difference is between the experience of making tea routinely, while thinking of something else, and making tea fully aware.

How can a conscious decision guide our actions, when we are hardly conscious of what we do?

Susan Blackmore sums it up with another question (p. 54) (did I mention the book is full of questions?)

Did I consciously attend to that, or did it grab my attention?

As I read the book, I find it harder and harder. I’m halfway through now, and am getting confused.

This is to be expected of course: it’s a college level text book on a difficult issue.

Some sentences are therefore very difficult to read. If I were studying this in college now, and expected to pass a test on it, I’d be making a list of the abbreviations. Perhaps I should do that anyhow?

The word ‘unconscious’ is usually associated with Freudian issues – like unconsciously being attracted to someone and then getting angry with them.

It would be nice to assume our unconscious knew something was happening the whole time. But this isn’t clear. What is clear is that (p. 61)

… “experienced time and clock time are not the same thing.”

Susan Blackmore may sound like your average scientific skeptic, but she has been doing Zen Meditation for years and says at the conclusion of chapter 21 (called ‘reality and imagination’, p. 319):

“[The] lessons learned from other worldly experiences cannot be … lightly dismissed. Those who are trained in the use of hallucinogenic drugs learn things that no novice has any inkling of. Experienced travelers learn to look calmly into their worst fears, face up to death, confront or lose themselves, and many other lessons. Special skills are needed for exploring the worlds revealed this way, and those who acquire this kind of wisdom recognize it in others. Understanding all these phenomena is not helped by drawing a sharp line between reality and imagination.”

About meditation (Blackmore has been meditating for years) she says:

I don’t agree with that one, by the way. It defines meditation in general as though it were identical with one specific method of meditation.

Without doing some depth work, our conscious mind doesn’t even have it’s hands on the steering wheel. Our conscious mind is in control of hardly anything.
If it were, we would have the lives we dream of having. Instead we live out of our unconscious complexes. We marry the wrong men (over and over), we are unhappy, etc. you get my point. And instead of trying to dive into the personal unconscious to see who IS at the steering wheel, we blame the world for being unfair, or are parents, or are ex-spouses.

As a former teacher of math I know that learning math isn’t just about practicing and learning by heart. It’s not even (for most people) just about understanding. It sometimes takes students (as it did me, I’m no genius) a while to understand: it helps to let what you’ve learned germinate a bit. That is: take a look at the same subject a month later and you will understand more.

Our conscious likes to feel in control – but is it? That’s really the main point I got from this book (aside from a lot of interesting facts).

One thought on “Consciousness: an Introduction, by Susan Blackmore”