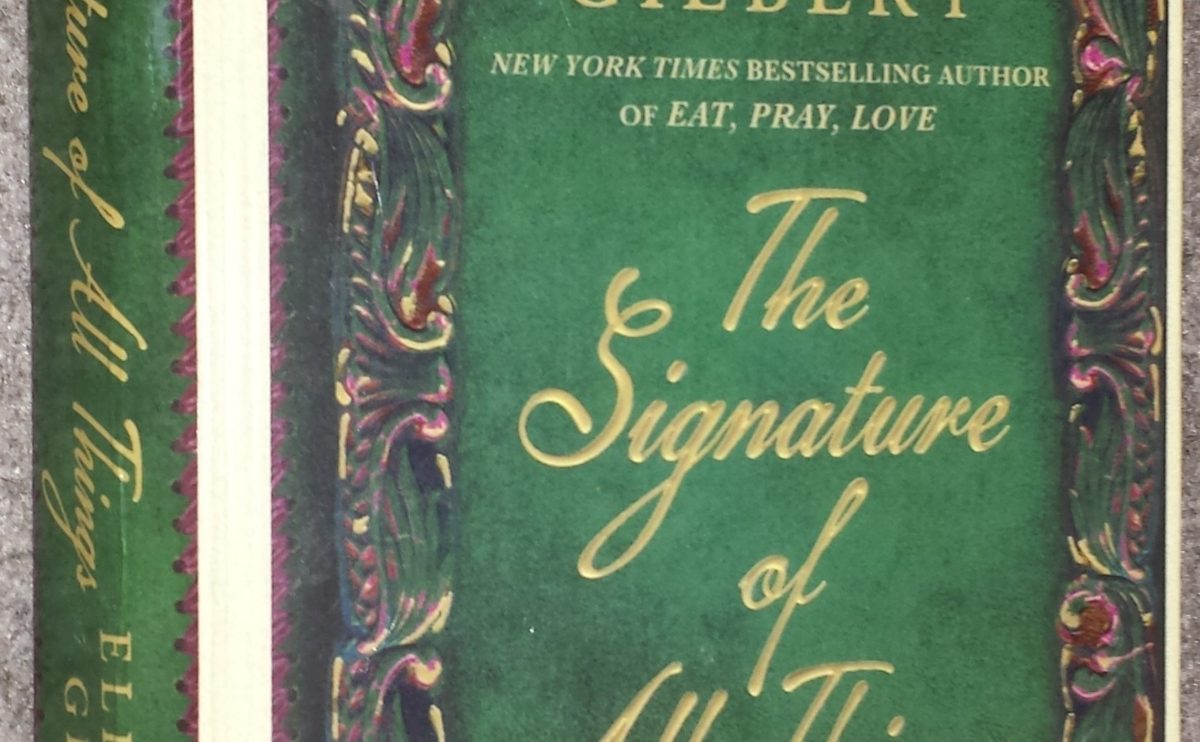 For some time I have made a point of finding biographies of strong women. The Signature of All Things had me fooled for most of the ride – was it real or not? At times I wondered how Gilbert could have possibly gotten the personal information she uses. At others I cringed a bit at the Dutch. I’m not sure whether it’s simply faulty in places, or whether she is so true to 19th century Dutch that my 20th century knowledge of the language is not competent to figure it out.

Elizabeth Gilbert’s book did keep me captivated. I liked it more than her famous Eat, Pray, Love

. Eat, Pray, Love was nice, but I would not want to reread it. The Signature of All Things – about a female Darwin – is worth a second look:

Alma Whittaker is born in 1800 in Philadelphia to a rich father who has worked his way up in the world. She grows up in a world defined by her father’s botanical skills and extensive library and her mother’s Dutch roots and protestant strictness. Some women growing up in such wealth got access to knowledge and skills that most women would not even dare dream of even today. Alma grew up learning not merely Dutch and English, but German, French, Latin and Greek. Her mother tutored her in math and the library provided what intellectual nourishment her mother and later a tutor could not provide.

One reviewer notes that Alma got her brains from her father, but this is a common fallacy.

Just because the mom doesn’t go out and prove her intellect publicly, doesn’t mean she doesn’t have any. In this case: mom is her father’s secretary and accountant. Unlike her father, her mother is formally educated. Her role is behind the scenes, as is proper for a woman in that age, but it is no less for that. We’re talking about a lady who designs a mathematically rigorous garden for their estate. She turns her husbands rough commands into polite business letters. She has developed her own accounting system – a system so complex that after her death her daughter has serious trouble figuring it out (though of course she does). That takes brains.
As if to make sure this point is not overlooked, when Alma later in her life finally meets her Dutch uncle, he notes that she has her mother’s mind. He cries saying it, after reading Alma’s thesis about natural selection.

Anyhow, the book is fascinating. It’s an almost believable history of an unconventional woman scientist who lives within the constraints of her culture, yet skirts the boundaries of it. She never gets married, is a successful scientist in a field she opens up and ends up traveling the world by herself. This is perhaps the least likely part of the novel. A woman in that age would have made sure to travel with a companion of some sort. There should at least have been a maid.

Is there eat, pray and love in this novel? Aside from the love for Dutch wentelteefjes (#), food does not play an important part in this novel. Praying isn’t very important either. The only love Alma finds is unrequited (twice). She does find sexual release and has an affair. In fact, the only happy ending to the novel is in Alma finding a home and job among her Dutch relatives. This is quite daring in a novel – a happy aging spinster? Seriously? Yes, seriously.

Gilbert’s novel is not merely feminist, but it also deals with one of the main challenges of our wold today: how to combine a scientific worldview with the meaning of life. Alma is (again surprisingly) a down to earth scientist. She analyses facts, describes them minutely and ends up coming up with the theory of evolution. The reason she doesn’t publish her thesis is that she can’t figure out how come people act selflessly, if selfishness is at the root of evolution.

That question is perhaps central to the book as a whole. It’s the men who bring in other aspects of spirituality. First a husband who remains Chaste for the Lord, then a Tahiti native with whom she has sex. He helps resolve some of her issues after her husband dies. Last but not least Alfred Russel Wallace, the guy who came up with the theory of evolution simultaneously with Darwin and dabbled with spiritualism. Gilbert concludes her novel with a conversation between Wallace and Alma when they are both old. It’s a lovely meeting of minds. The kind any intellectual dreams of.

I think it’s remarkable that Elizabeth Gilbert knits so many threads together believably. The book held me captivated all through.

(#) Wentelteefjes are explained by Gilbert to be like cinnamon toast. I like the analogy, but wentelteefjes are made with (usually old) bread, milk and egg. Then they are baked. They are usually eaten with lots of sugar. The sugar is often spiced with cinnamon.

See also Tracy Chevalier, Remarkable Creatures, a novel about the first fossil hunters – some of whom were really women.

One thought on “A woman scientist… The Signature of All Things, Elizabeth Gilbert”