On Valentine’s Day, I walked into our bedroom and a bird flew up in my face.  He panicked, back and forth fluttering off the walls.  I quickly opened a window and guided him out.  But that’s not the end of the story.  This bird has spent every day, for the last five weeks, pecking relentlessly against the windows of our cottage.  I can hear his repetitive tapping even now. 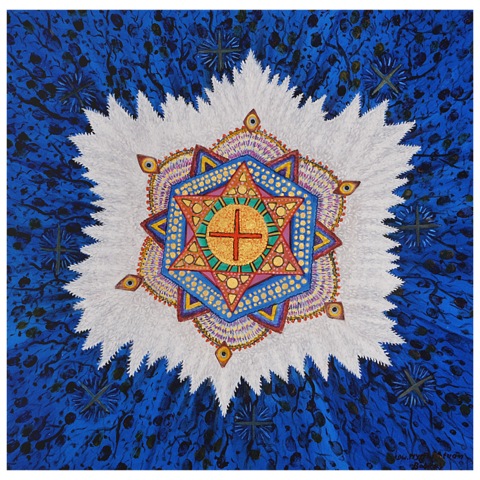 ent of death. Is he a messenger from the spirit world?  What is he trying to tell me?

The day the bird arrived was the day my dear friend, mentor, and spiritual teacher, Dewa Nyoman Batuan, died.  I met Batuan when I was twenty-four.  He welcomed me into his village compound in Bali and was my host for nearly a year.  Even though he was very poor, he shared his house, food, and knowledge with me.  We’ve watched each other grow for over forty years.  He book-ended most of my adult life.

I returned to Bali over twenty times and Batuan was always my first stop.  But often he beat me to it.  Wherever I stayed he would always find me, his face beaming and his arms outstretched.  We’d walk through the rice fields or sit for hours nursing our glasses of Bali coffee made simply with hot water and coffee grounds.  He would talk enthusiastically about spiritual connections he’d made and soon pull out his mandala paintings to punctuate his impromptu lecture.  “Why do I paint mandalas?” he asked. “Because it can hold everything.  Earth, air, fire, water, ether, animals and people.”  He work expressed his quest for enlightenment, made his life more beautiful and let him enjoy learning, practicing and passing it along.

A month after Fate first drew me into his village he set up Pengosaken Community of Painters.  His idea was that a handful of master painters could teach children and teenagers to provide much needed income for the village. The proceeds from sales would go back to the community, which in those days before the island’s over-development was how everything worked:  community first, then family.  Thinking about yourself first was unheard of. 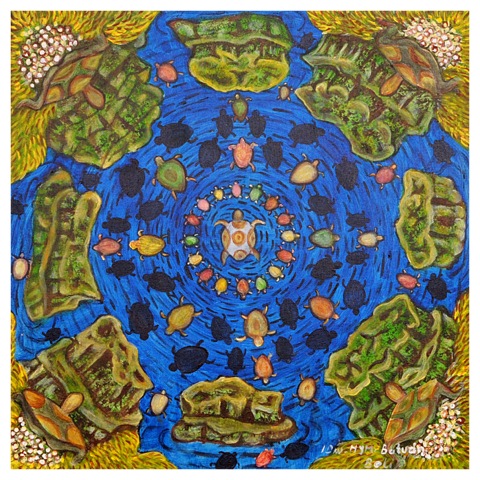 Batuan’s generosity was unlimited. He was always giving. He was a schoolteacher, community organizer, and for many years, the head of the village.  A traditional but also a modern man, he was able to discriminate between the values of each.  I may have been among the first Westerners to meet Batuan, but over the years his reputation became international and he befriended artists of all kinds.  Even though he and his wife raised six children and had seventeen grandchildren, and even though his spiritual devotions meant spending much of his day in temple duties, he was never without several canvases in progress. Over the decades, I watched his compound overflow with an endless stream of kaleidoscopic mandalas which he painted whether tourists bought them or not.  (But many did; both Queen Elizabeth and Ronald Reagan valued and hung his paintings.) More about Batuan

In 2009, I published an art book of his life’s work called Mandalas of Bali: Our Place in the World

, which features 140 color mandalas and includes Batuan’s writing about thespiritual and cultural aspects of Bali.  It’s a wonderful expression encapsulating the wisdom and art of this extraordinary man. In 2011, Batuan appeared in my film TALKING WITH SPIRITS: Journeys into Balinese Spirit Worlds.

I was very fortunate that my young eyes were opened by Batuan’s genuine concern for my unfolding.  His spirit was, and still is, an inspiration to me…and as persistent as that little bird tapping at my window, “Don’t forget me”. 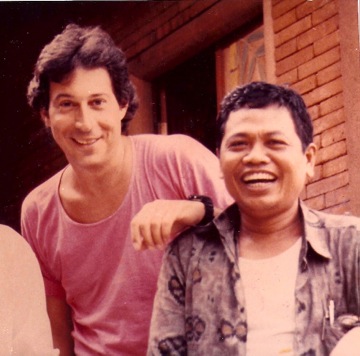 Guest post by Michael Wiese who is a publisher and filmmaker.

4 thoughts on “When your spiritual master dies”

Mandalas of Bali: Our Place in the World