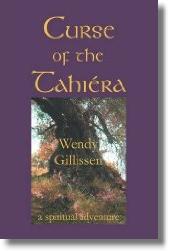 I met Wendy Gillisen online. It turned out we have a lot in common: an interest in fantasy fiction and spirituality and what’s more, she’s also Dutch. So she sent me her novel ‘Curse of the Tahiéra. I was of course surprised that she would have written a novel in English when her first language was Dutch (it is available in Dutch as well). I have to admit, I was also skeptical of the quality. I get sent books a few times a year and they are generally not worth discussing.

The first and only ‘dutch-ism’ I could find was on the first page. The book gets better and better as you read on. Once I’d passed the first chapter, I was totally hooked. The world Wendy has created reminds one of the Middle Earth of Tolkien, but more natural. It’s reminiscent of Marion Zimmer Bradley‘s interpretation of the myths of Arthur, except that this is not about king Arthur. It is clearly inspired partly by the stories of Atlantis, except that it’s not about Atlantis.

In short: Gillissen created her own world, though heavily using themes from the myths and history of Great Britain.

In this world three races of people have lived together for centuries, mixing yet always in conflict. Our main character young ‘Rom’ is of mixed descent and in consequence has had a very difficult life. It’s about to get even harder as he meets a stranger on one of his travels. That’s the start of the story. Together they get into more trouble and Rom learns the magic that is his inheritance. Together they travel their world because the wise stranger has noted a danger that he feels only Rom can avert.

The magic of this world has everything to do with dreams. Dreams which constantly mix with reality. This is a reality which Rom has to face head on and explore. Rom is a strange character: like Harry Potter he is giving, yet sometimes aggressive. As we (and he) learn more about him, the mystery deepens. Facing himself will determine the future of this world. I won’t give the plot away, but I can tell you that it will move you AND make you curious about the sequel.

The best fantasy fiction creates a world that is internally consistent and convincing. It makes us feel, if only for a few hours, that what is described could very well be. Wendy Gillissen has created such a world and I’m looking forward to the sequal which should come out this autumn.

3 thoughts on “Spiritual fantasy: The Curse of the Tahiéra”