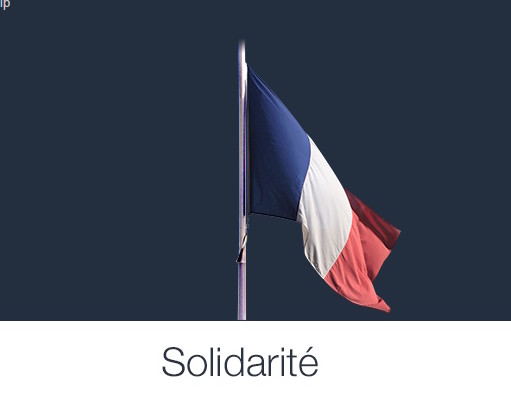 Authorities in France and Belgium took people into custody Saturday in the aftermath of the worst violence in France since World War II, a series of terror attacks that killed more than 120 people.

Alright: in a European context this is a massive attack.

However, the outpouring of support is a bit excessive. The image attached is from Amazon, for example.

Why is it too much? Because the Middle East has been burning for years. In case anybody needs reminding: there are reasons why refugees are pouring into a few reasonably stable Middle Eastern countries, including Turkey, Egypt, Lebanon and Jordan.

Notice that Israel is missing from that list? On the UNHCR webpage dedicated to the problem, refugees that end up in Europe don’t register either: there aren’t enough of them. Other sources list the total number of refugees coming into the EU at 160.000. Total number: over 4 million to date.

There are reasons that many people are on the move: they’re not safe in their home country. A massacre is going on. Or to use a different word: a genocide. I’m going to put this as plainly as I can: people are being killed in a surge of violence so consistent that the word genocide is applicable.

Perhaps the word terrorism works in France: the main result, aside from 129 deaths, is terror. There is fear way beyond the cause, in fact. Chances of dying in a car accident in Paris are still higher than the chance of dying from a terrorist attack.

In contrast: in Syria and neighboring countries the scale of the problem is a lot larger: genocide, destruction of all social stability, women raped as a matter of course and monuments destroyed that date back to the beginning of human civilization.

And yet we’re in collective mourning over Paris.