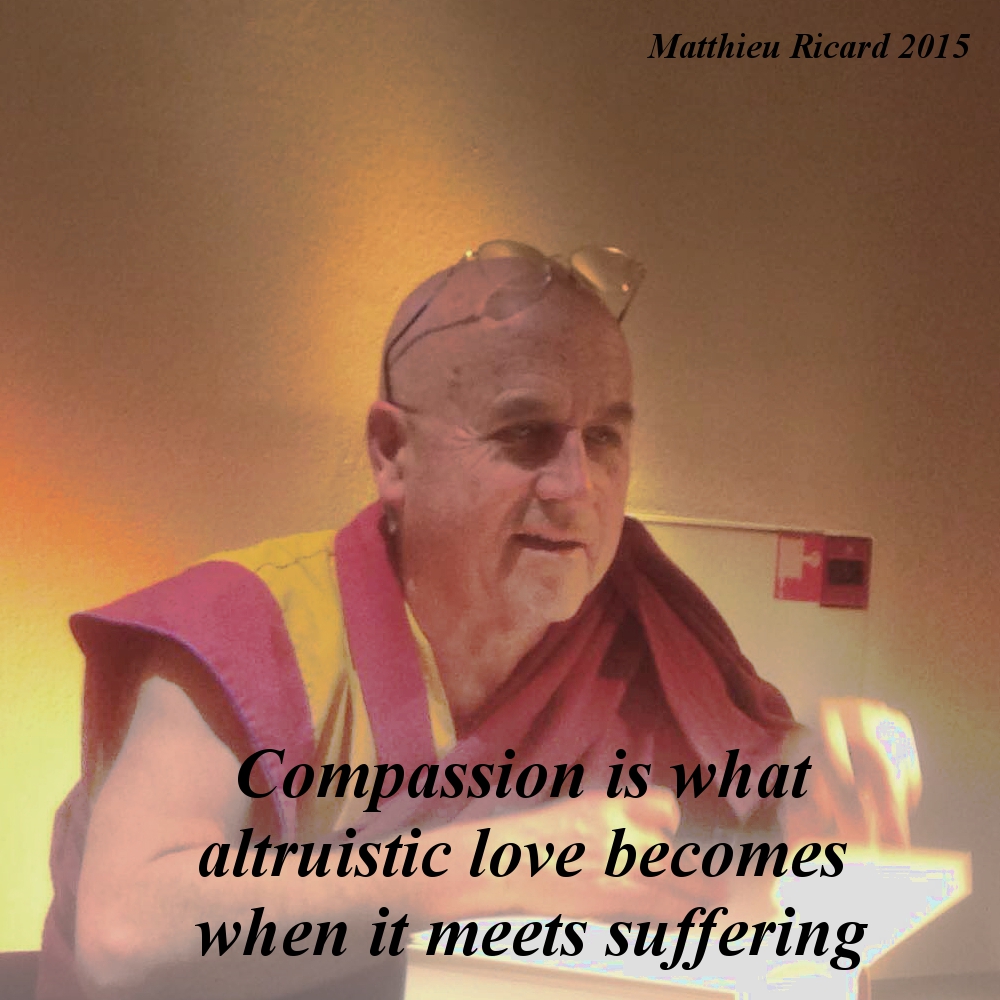 The great Tibetan Buddhist Monk and philosopher Matthieu Ricard was in Amsterdam yesterday to talk about his new book – the Dutch translation of the French ‘Plaidoyer pour l’altruisme’. It will be available in English this summer as Altruism: The Power of Compassion to Change Yourself and the World, in a shortened version (by the looks of it). It is an encyclopedic work – with corresponding size: 928 pages in French. The Dutch edition is equally large and only available in hardcover.

Ricard has gone head-on with the Western scientific and philosophic idea that real compassion doesn’t exist. For instance, it is a common thought (going back to the likes of Freud) that underneath all compassion there is selfishness. The science doesn’t support this, thankfully, and Ricard brings it all together.

He notes that with most other qualities we expect practice to make perfect, yet with qualities like compassion we somehow expect them to be either innate and unchanging, or able to change very fast – one night of meditation ought to do it. In contrast, he himself meditated for 25 years.

Surprisingly, he started the evening by giving us a quick overview of just how badly we are screwing up the planet (excuse the word – he certainly didn’t use it). It is his hope that as we develop compassion, ‘extending it to the other 1.6 million species’ as well as future humanity, we will do something about the pending climate change and humanitarian catastrophe while it is still reasonably doable.

After this shock treatment (a hush came over the audience) he explained among other things that there are at least two types of empathy.

The first can lead to emotional overload and burn out. The second helps doctors help their patients. However, the second is also what makes psychopaths so very charming and persuasive, even though they have no affective empathy at all. They see people as objects to be used.

Every man must decide whether he will walk in the light of creative altruism or the darkness of destructive selfishness.

And (not quoting anybody)

Compassion is what love becomes when it meets suffering.

The alternative to burn out from affective empathy isn’t distancing yourself, but what he calls the ‘glow of compassion’. The glow of compassion energizes and makes people happy. That burned out feeling and that glow are two very different things and the glow can be trained. So he claims based on both experience and research.

In another optimistic note, he observes that one reason why we ignore altruism, is because it is so normal. If you ask for directions in a strange town, you are likely to get it. The stranger who helps you find your way will have no selfish reward at all. We take this for granted. Ricard called it the ‘banality of goodness’.

I am looking forward to reading the book, when it comes out in the more affordable English edition.

Here is the full video of the evening: