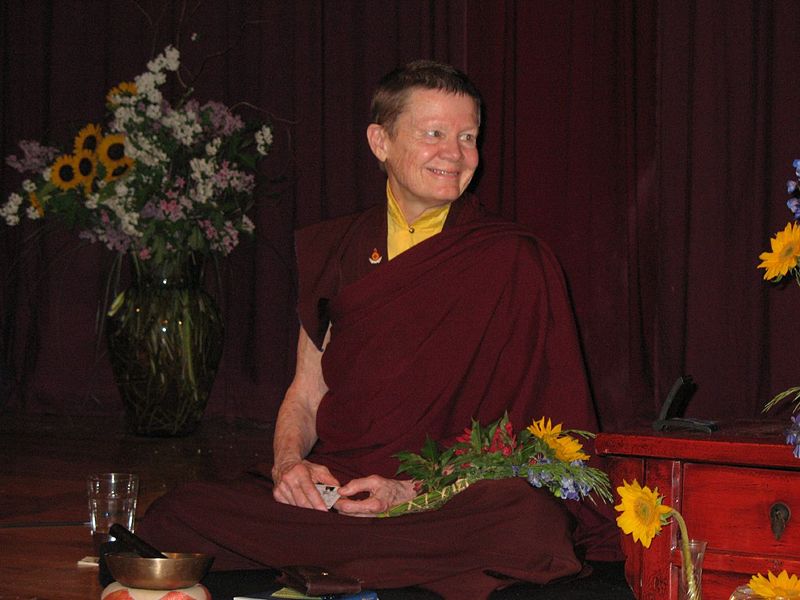 Gender is very much in the news these days. Feminism is losing its negative connotation and the internet is making it possible to empathize with girls and women all over the world fighting for basic liberties. (*)

I am a feminist and was raised one. Strong women are so normal in my family, that my eldest brother called our family a matriarchy. However, out there in the world, I have felt the pressure of society to conform to norms that just didn’t fit. Being very outspoken I have often felt myself heard, but not taken seriously.

I started out on this topic with a very simple question: Why is it that women outnumber men in most spiritual traditions, but it’s still usually men that take the lead? Or in other words, where are the women spiritual teachers? I’ve found you a few of my favorites, past and present, and hope you’ll help me discover more. (*)

I suspect it has everything to do with the fact that men may talk about humility, but it’s because it doesn’t come naturally. In contrast, women who have the ambition to become successful and prominent, rarely take that energy into the ‘spirituality business’. And when they do, they keep it small.

Perhaps it merely needs a generation or two… In the meantime though, let’s show some female solidarity and applaud the women who DO get a share in the spiritual spotlight because they have something to say.

Female spiritual teachers – often more inspiring then men! Here are some of my favorites.

This list is based on what has personally inspired me, so it isn’t as balanced as it might be. However, it does include women from various spiritual and religious traditions.

This doubles as my index page for my female spiritual teachers, so you’ll have to excuse me for the over representation of theosophists on here. For one thing: women have been working in the Theosophical Society on an even footing with men for over a century, so female theosophical teachers aren’t as hard to find as in other traditions. For another – I was immersed in that tradition for almost two decades, so it’s the one I know best.

THE most prominent interfaith spiritual teacher of today. No man goes as far as she does. Looking with a sympathetic and mystical eye on all religions, she’s written her own descriptions on the history and spiritual path of main world traditions.

More women about religion and spirituality in general:

One of the few living female spiritual teachers on this page.

In a tradition generally dominated by men, Buddhism, she holds out the position of the best read female teacher in the world. She’s also, according to my stats, the third best selling living Buddhist teacher overall (having only Thich Nhat Hanh and the Dalai Lama ahead of her).

Her teachings combine the traditional strengths of the female perspective with the wisdom of Buddhism in a way that’s practical and compelling, down to earth, honest about the emotions you’ll have to face and yet charting a path that can be followed.

Do tell me: are there prominent women in Theravada Buddhism? I know of a few in Zen, but not of any in the (Western) Theravada or Vipassana community.

I have always admired Mother Teresa. This has come out in my collection of Mother Teresa Wisdom Quotes as well as in my recent review of Love: The Saint and the Seeker – Mother Teresa and Christina Stevens.

She was the visible face of Sri Aurobindo’s spiritual teachings in the last decades of his life. This shows her not much of a feminist of course: she stood in his shadow and needed his borrowed charisma. Yet she had plenty to offer on her own. She knew the spiritual traditions of her time backward and forward and was an almost equal to her master.

The kind of book that will help you towards self knowledge as much by what doesn’t fit, as by what does.

Search for the Soul in Everyday Living, The Mother

Inspiring and thought provoking view on the spiritual path. A bit dated in places, but not less fascinating for it. There are real gems here though…

More women inspired by Hinduism and or Yoga:

She lived from 1831 till 1891 and was one of the most infamous spiritual teachers of the 19th century – male or female. She helped popularize reincarnation and karma in the west, was one of the first to seek spiritual inspiration in India and set the tone in many other ways as well.

As you can perhaps tell from the amount of pages I’ve devoted to the lady on my website, I devoured her writings in my twenties: yes, I’m one of the at most hundred people around the world who have actually read the Blavatsky Collected Writings from cover to cover.

This lady went beyond categories. She was not merely a spiritual teacher – in fact, in India she’s mostly remembered as a champion of the poor, and a fighter for India’s independence. She started her public career as a reformer and socialist – her medical degree was withheld for a technicality: the real reason was probably that she was just too controversial. And that was BEFORE she joined the TS and took on the work of spreading Blavatsky’s teachings all over the world.

An accomplished speaker, she defended herself in court on many occasions, but that same voice drew crowds and compliments from friends and foes alike.

She really lived feminism when the word had not been coined yet: divorcing her husband she lost her kids to him, because her life wasn’t up to the standards of her time. She fought for birth control, and the rights of female factory workers. Voting was not yet on the table at the time.

Mabel Collins
Mabel Collins is remembered today, when at all, as being the author of the spiritual work Light on the Path. Few people realise that she was a prolific author, penning at least 46 books. She wrote a number of articles, some of which were to form the basis for her books and was also a fashion correspondent for The World, writing a regular column. Most of Mabel’s novels are romantic sensation fiction. In later years her experiences in the occult and theosophy were used as a basis for her fiction writing.

Theosophy book reviews – books by or about women

(&) The image shown above is a screenshot from the video embedded here.