Every once in a while I do an overview post of all the spiritual stuff I have put online in the past period. It turns out that the last time I did this was almost a year ago, so this post is long overdue. This post is also the basis for my... Read More... 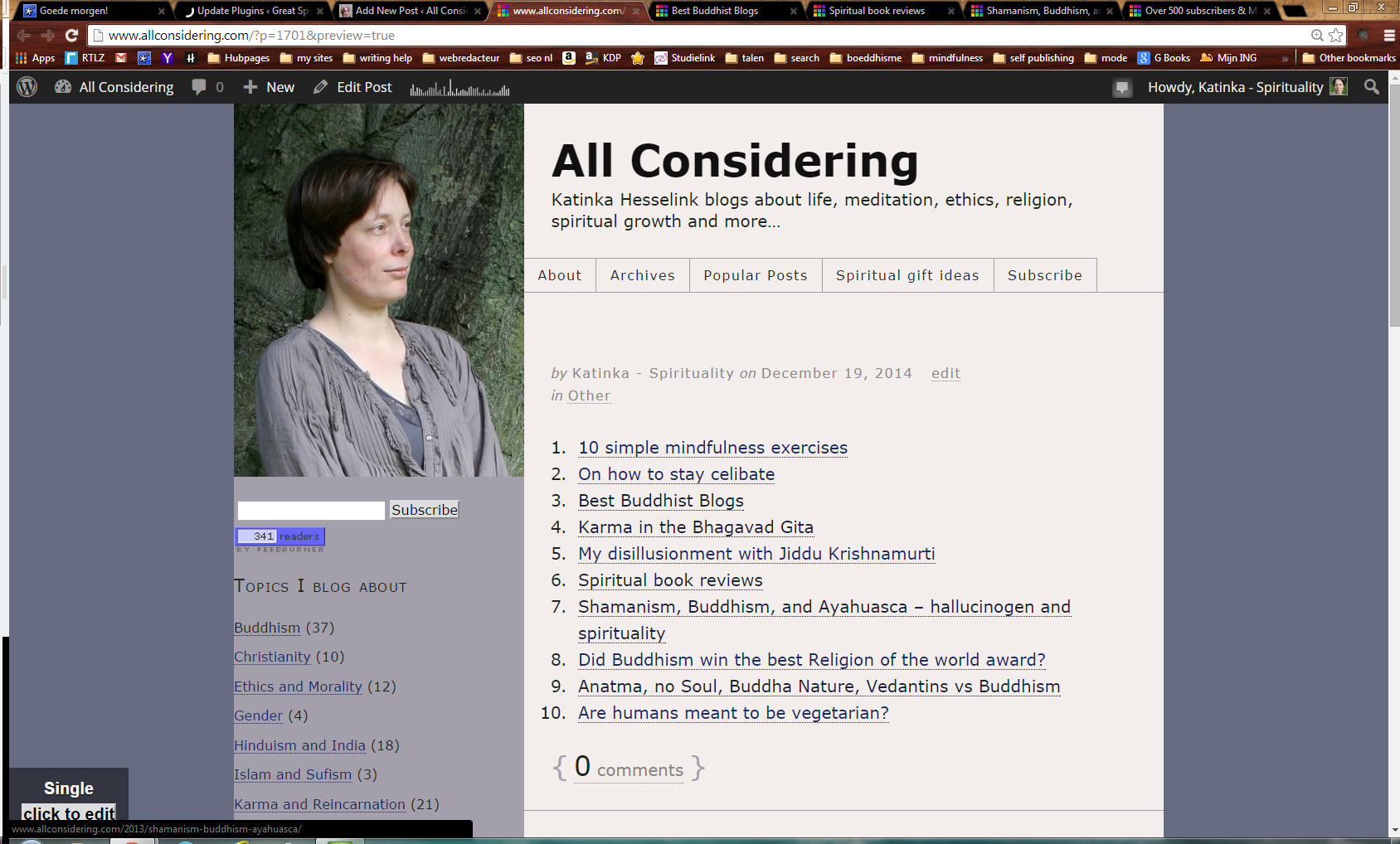 What do you know, just when I have the energy to tell you all that I am too busy to blog – I post one thing after another. So this is my habitual end-of-year blogpost. This was a busy year for me. I bought a house and moved into it, I lost my grandmother, I started on the path towards becoming a mindfulness teacher, I went to Hamburg to see HH the Dalai Lama, I am signing up for finally finishing my bachelor religion studies and the main site I do business on has folded.

Are you keeping up? Probably not. I know I have a hard time keeping up myself, sometimes. [edit] (In fact, I forgot all about publishing my first book: Essays on Karma)[/edit] Thankfully the business part of my life is going better than expected – and just in time for Christmas too. That gives me some room to breath and finish that bachelor degree before the mindfulness training starts I set my heart on. With a few clients added in, I will be able to manage just fine.

So – what about this blog? Well – here are my top spiritual blogposts of all time.

END_OF_DOCUMENT_TOKEN_TO_BE_REPLACED

Bodhicitta is the mind of enlightenment. It not merely the wish to help all sentient beings attain enlightenment, it is the firm decision to take every single one of them to that state.

This is obviously as inclusive as it gets. EVERYBODY is included in bodhicitta and the corresponding Bodhisattva vow. And the bodhisattva vow is taken by every practicing Mahayana Buddhist.

Buddhists are humans and therefore generally haven’t been able to integrate Bodhicitta in their lives, so the Tibetan Buddhist tradition advises starting with meditating on equanimity.

Equanimity is the start to Bodhicitta, and it doesn’t require any sort of faith, so it is a great practice for anybody who wants to face up to racism or prejudice in their own mind.

Meditating on equanimity starts with visualizing a friend, a stranger and an enemy. Observe the difference in how you feel about them. In my morning meditations, I often settle for visualizing someone who has recently hurt or offended me. If I can feel friendly towards them, I’m off to a good start of the day.

The aim of this practice is not indifference, but equal good will towards all three.

Racism has been much in the news lately. In the Netherlands we have been faced, again, with the consequences of the UN advice to change our pre-Christmas Sinterklaas-celebrations. The Dutch are used to feeling that they aren’t racist. This is an irrational feeling, as study after study shows that people of color or a non-default heritage have a harder time getting interviewed for jobs – let alone getting them.

I have also heard stories of office culture where calling people of Indonesian descent ‘peanut’ is accepted as normal. This is done without any sense that it might be derogatory. I hope, for an English language audience, that it is obvious that this sort of thing is not in fact innocent.

As I understand it, psychologically, racism centers on two things: prejudice and tribal thinking. END_OF_DOCUMENT_TOKEN_TO_BE_REPLACED

I sometimes wonder what my life would have looked like if I had started meditating at 25, because that is roughly the age that I made my first attempt. At that point it was not too hard for me to follow the instructions in a meditation-booklet and so I... Read More...

Did you ever think that organisations, corporations and institutions have a life of their own? David Loy was in Amsterdam yesterday to talk to a university students and (mostly Zen) Buddhists about his book: Money, Sex, War, Karma: Notes for a... Read More... 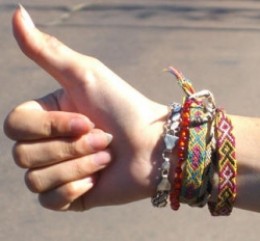 I was challenged to make this article (*) ‘A dummies guide to spiritual hitchhiking’. Although I write a lot about spirituality online, I have never hitchhiked a day in my life. My brother on the other hand hitchhiked all the way from... Read More...

Recently a Buddhist friend mailed me, asking why I had written so little recently. He has a point. It is time for an update. My online business has taken a turn upwards, so instead of a job, I’m now seeking customers to supplement my online... Read More... 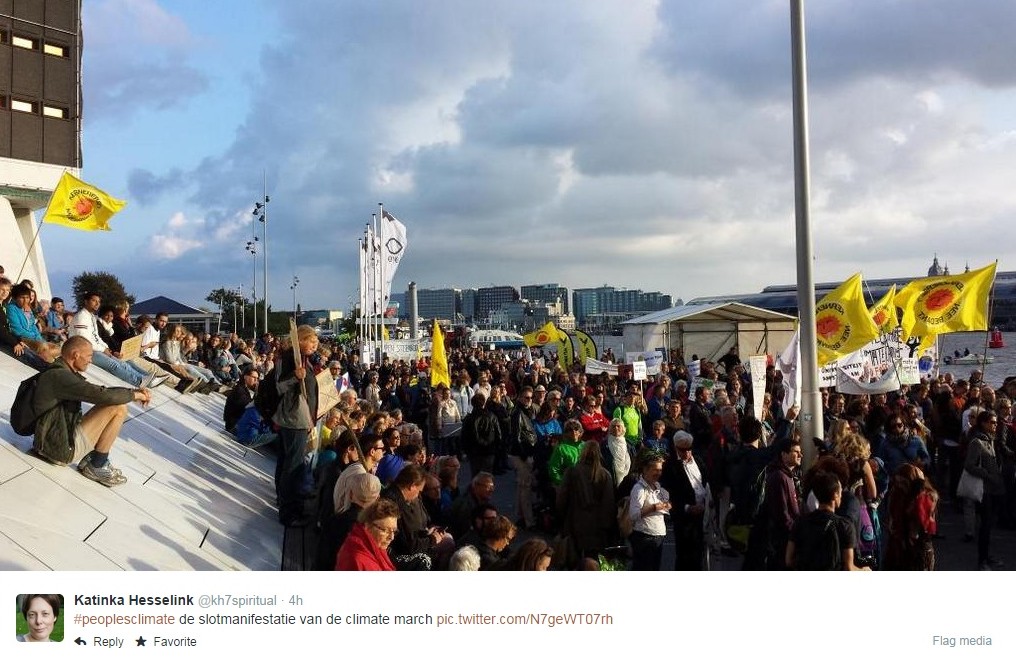 I was at the interreligious ‘march for climate change’ yesterday. Berthe Jansen represented Buddhism there and she noted that the bodhisattva takes a long-term view to problems and theirs solutions. This was relevant to the topic, because... Read More...

As a woman involved in spirituality, every once in a while I’m asked what I think about female spirituality. I have always thought it a weird question and none of the books I have read about the topic have been particularly inspiring to me. Most... Read More...

I have always had a tendency to fall for bad boys. I have long suspected that this probably expressed my own suppressed ‘bad girl’ tendencies. However, that didn’t stop me from being a good girl. Drugs, rock and roll, partying... Read More...