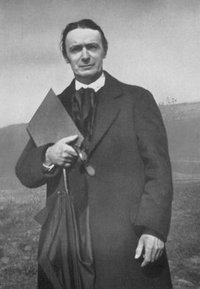 I’ve been reading ‘Rudolf Steiner Erdenleben und Werken’ (aka: Rudolf Steiner‘s earth life and works) by G. Wachsmuth. It’s a good biography, though obviously written by someone who is a fierce devotee of Steiner. He tells Steiner’s story as Steiner might have wanted it told. For my purposes this is good: I want to know the ideals, the mythology of Anthroposophy, as much as I want to learn the facts of his day to day existence.

I’ve not finished the book yet – I’m still reading about the years that Steiner was a member of the Theosophical Society. But it’s already clear that Steiner has his own priorities when it comes to where he needs to go – and they have nothing to do with the Theosophical Society. Because Wachsmuth is so very thorough in reporting just what Steiner said on important topics in what year, it is clear that Steiner already had great misgivings about the TS before he left it/was expelled. From my perspective those misgivings were hypocritical, but we’ll get to that later.

Let’s start with Steiner’s mission on earth, as he probably saw it: he wanted to integrate Western Wisdom with the esoteric tradition. He wanted to bring out the underlying truths in Goethe’s work, as well as other philosophers of the ‘Abendland’. Abendland is German for what has been called the Occident, or the Western World. It’s clear from the way the term is used though that it’s a more specific cultural stream than that: those people who have united in their culture the Roman, German and Christian heritage.

We should remember that Steiner lived to see the decline of Germany as one of the great superpowers until it lost in World War 1. Dying in 1925, he did not live to see the Great Depression, which would hit Germany hard and would prepare it for Hitler.

What Steiner was in effect doing, I think, was standing up for Germanic wisdom – and bringing it up to date with the spiritual and scientific insights of the time. He integrated the most important of theosophical ideas into his anthroposophy: karma, reincarnation and human spiritual evolution. Though of course he gave a personal spin on the latter concept. I say ‘of course’ because no one has been able to do otherwise on that topic. It turns out to be very hard to wrap every detail up in a vision of human spiritual evolution. The latest to try that I know of is Ken Wilber, but Blavatsky had preceded Steiner in the attempt.

Steiner saw the theoretical bend of most theosophical lectures and didn’t like it at all. For instance he once reported on discussions about building schools, creating magazines and other things. He felt that instead of discussing such things, one should just do them (p. 140). Can’t help but admire someone like that. In the doing many of the questions one has in advance will iron themselves out. Usually plans and their execution are very different things – so to just act is often a good idea. One can always change things that don’t work or aren’t in line with one’s vision.

It would not be fair to Steiner to suggest he didn’t take in the Eastern Wisdom the Theosophical Society brought to the West. He did. He lectured on topics like Buddha and Christ. His conclusion was always that there were initiates all over the world: Buddha being one of them. But Christ was special. His dying for humanity at Golgotha was a landmark occasion in human spiritual evolution. It changed things fundamentally. In order to iron out inconsistencies in the Bible, he came to the conclusion that there had been two Jesus Children. This makes his Christology rather unique of course.

What’s important for our narrative is that Steiner was busy with a LOCAL version of wisdom. This is fine, as long as it doesn’t become exclusive. Most of us have favorite spiritual stories and ideas, and they’re usually based on the religion we grew up with. However, as president of the German section of the Theosophical Society it was his duty to stand up for the freedom of each person to find truth wherever they could. This is where the paradox or hypocrisy comes in. He did always stress that people should be free to find their own truths and should investigate for themselves. He had this in common with Annie Besant, but didn’t seem to realize it. He felt Besant and C.W. Leadbeater were mostly building up a series of doctrines that people were supposed to either believe or leave.

In the end Steiner did leave. He had already founded the Anthroposophical Society when Annie Besant expelled him for not allowing members of the Order of the Star into the German Section of the Theosophical Society. This is hypocritical because this meant, in effect, that people who decided for themselves to belong to that organization, could not be in his. That meant they had to either believe it, or leave the TS. In other words: he became on this issue what he accused Besant of being. And of course, she had to expel him. It was a set up piece, he knew the time had come for him to go in his own direction. And of course most of his followers, and therefor most of the members of the German Section went with him.

The result is, for better or worse, that the Anthroposophical Society is mostly about Steiner. It has founded schools, created a whole field of alternative medicine, alternative agriculture and much else. Steiner’s teachings have a very practical side to them that has been fruitful in many directions.

In contrast the Theosophical Society (with headquarters in Adyar) is still a place where people come together to try and find universal wisdom. The result is that in the TS there will be lectures on Buddhism, Yoga, Alternative Christianity and Gnosticism. The Theosophical Library in Adyar is world famous for the rare Indian manuscripts it has preserved. There is hardly a topic theosophists won’t discuss. And yes, that has the weakness of being mostly about talking, not doing. Because how can the universal ever become specific enough to guide action? That translation from spiritual to practical is mostly left up to the individual members, though in the area of charity the Theosophical Order of Service does do a lot of good in India, Pakistan, the US and other countries. And in the theosophical spirit it does so without imposing any ideas on people and without regard for people’s background.

For me personally the quest for truth is too important to let local considerations be important. Only when one looks at the whole – the whole of humanity – can understanding of underlying issues be fully understood. This is exemplified by the current economic crisis: it shows that local experts just don’t know enough to deal with a crisis of this kind. It takes a global working together. Similarly, ecological problems don’t limit themselves to the boundaries of countries or cultures. Polluted air goes everywhere. The falling of PH in the seas isn’t limited to Iceland or China. Global climate change is indeed global, even if the effects are very different locally.

More about Steiner and Theosophy.

14 thoughts on “Rudolf Steiner: Christianity and Theosophy – about local versus universal wisdom”